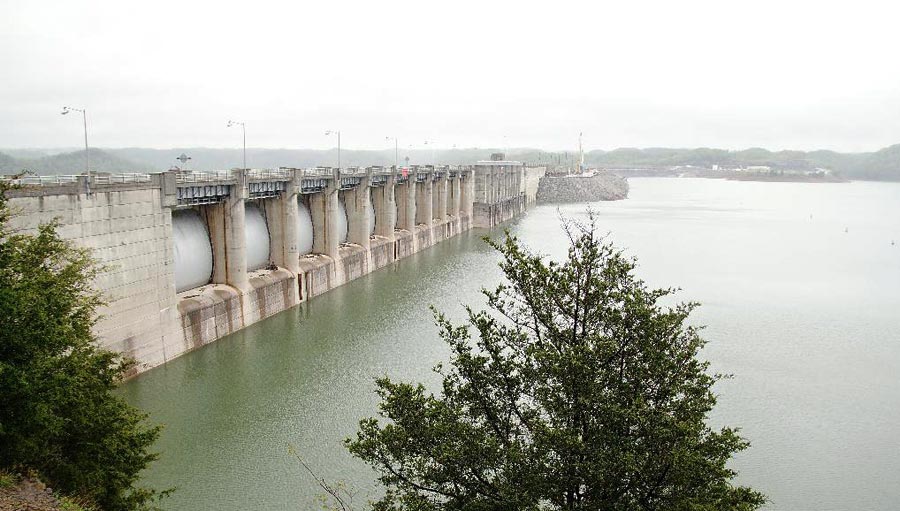 RUSSELL SPRINGS, Ky. (April 19, 2013) – During a completion ceremony today in the Russell Springs Auditorium and Natatorium, a live feed of the last concrete placement on the work platform at Wolf Creek Dam drew applause from dignitaries, stakeholders and citizens in attendance.

In only a matter of minutes on the big screen, the U.S. Army Corps of Engineers Nashville District officially completed the final piece of the barrier wall that is critical to the repair of the dam.

“There have been so many moving pieces and the work done here has been nothing less than world class,” DeLapp said.

Contracting crews with Treviicos Soletanche Joint Venture recently placed concrete into the last of 1,200 piles that form the 4,000-foot-long barrier wall.  Soon afterward the Corps started capturing water from the spring rains in Lake Cumberland.  The lake has been on the rise ever since.

DeLapp announced during the ceremony that the pool elevation is already up to 701 feet, which is more than 20 feet higher than its reduced level during construction.  The Corps plans to operate the lake between 700-705 feet during the 2013 recreation season before returning to historical operating levels in 2014, he said.

Rogers noted how pleased he is to see water rising in Fishing Creek and across the Lake Cumberland Basin.

“And thanks to the great work of the Corps and these contractors and all involved, I think we’re now ready to see the rebirth of the tourist economy in this whole section of Kentucky,” the Congressman said.  “It’s been a hard long pull.  It’s a very costly one – in fact $594 million dollars.”

However, in the engineering community the difficulty and significance of completing the project cannot be overstated, Rogers explained.

“We’ve heard from these engineers and contractors… that this is a unique project.  This has never been done before anywhere in the world,” Rogers said.  “And they had to invent the process, and the machinery, and train the workers on something that had never been done before.  Well this was sort of like a shot to the moon in the business that these people are in.  And so this is historic.”

The historic completion of the barrier wall and the lake levels being higher is also something the state of Kentucky is making plans to capitalize on to build up tourism in the region.

Marcheta Sparrow, Kentucky Tourism, Arts and Heritage Cabinet secretary, said that the Corps and the contractor firms are to be commended for their efforts.

“What they have done here is vital to the safety of our citizens and to the economy of this commonwealth,” Sparrow stressed.  “Our tourism community also is very grateful all across the state.  The Corps’ announcement in January that the lake level would be raised by 20 feet this year was welcome news to businesses all across the region.  And this is great news for our visitors, the boaters, the fishermen, and the marinas on Lake Cumberland.”

Sparrow said tourism around Lake Cumberland infuses $300 million each year into the local economy.  “And make no mistake.  Tourism puts food on the table for lots of families in this region,” she said.

This is why the Kentucky Tourism, Arts and Heritage Cabinet, and the Department of Travel and Tourism, and local partners are working to get the good news out about Lake Cumberland rising up again, she announced.

“We’re going to be using the phrase, ‘More Lake, More Fun,’ and I could not agree more,” Sparrow said.

“Through a screening process that began in 2005 we developed something called the Dam Safety Action Classification – we call it DSAC for short.  The projects most in need of rehabilitation were then categorized and prioritized, and this dam was categorized as a DSAC 1, meaning it was most likely to fail and had the most need of top prioritization and rehabilitation,” Burcham said.  “And actually Wolf Creek Dam is the very first DSAC 1 project that has now completed its rehabilitation.”

Burcham said the Corps has reached a milestone in its efforts and Wolf Creek Dam is now considered a model project because of the state of the art engineering technology and construction techniques demonstrated by the contractor.

The general added that the coordination between the levels of command within the Corps, along with the contractors, independent consulting board, residents in surrounding communities, and the elected officials has been absolutely outstanding.

“It provides us with a real world example of how we can achieve this kind of success on future projects,” Burcham said.  “And I want to congratulate everyone who has been involved with this project.”

The contractor of the project, Treviicos Soletanche Joint Venture, amassed more than 1.2 million man hours during construction without a lost-time accident.  DeLapp said this was an incredible achievement given the moving parts, equipment and people that constantly moved every day in the construction zone.

The joint venture is made up of Italian and French firms, both leaders in underground engineering works.  Leaders of both companies also spoke during the ceremony.

Jérôme Stubler, chief executive officer of Soletanche Freyssinet in France, said it is a great honor to contribute to the security of the United States on this project and to hopefully increase the tourism in the region.

“It is a technical success, clearly, but first of all, it’s a human success,” Stubler said.

He explained that the project was a real challenge but his team completed it far exceeding specifications. Teamwork and the tremendous safety record are key parts of the human success, Stubler added.

Stefano Trevisani, managing director of Trevi Finanziaria Industriale S.p.A. in Italy, said Wolf Creek Dam is the largest and most complicated rehabilitation and dam safety project in the world.

“And what has been achieved here – it’s something real, real special,” Trevisani said.

Trevisani said the joint venture had to be creative with designing and engineering to come up with new technologies and new solutions to get the job done.

“It was conceived at the time and successfully applied here,” he said.  “So when you enter into something new for the first time, of course there is a lot of risk, it also gives you something that has not been achieved before.  It gives you the sense that you are doing something not only for this project but also for the future.”

Trevisani said this innovative project is a benchmark for future projects all over the world.

The Nashville District awarded the contract to install the barrier wall to Treviicos Soletanche Joint Venture in 2008.

One of the first steps involved constructing a concrete wall 4,000 feet long and up to 100 feet deep through the earthen embankment.  It served to protect the embankment from the drilling action to install the piles that formed the actual wall.

The piles were formed by drilling 50-inch diameter holes through the six-foot-wide wall deep into the limestone foundation.  After drilling, they were filled with concrete to form individual piles.  Ranging from 108 to 276 feet deep, the piles were overlapped to form the continuous underground wall to stop seepage through the foundation.

The Corps placed more than 300,000 cubic yards of concrete to form the barrier wall and protective concrete embankment wall.

DeLapp said during the ceremony this is enough concrete to form a side walk five feet wide and four inches thick from the dam to Washington D.C.